skip to main | skip to sidebar

"All the heart wants is to be called again." Julia Alvarez 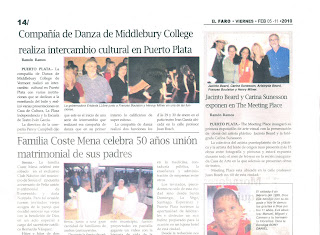 This is now probably too small to read! Just know that DCM is famous in Puerto Plata.
Posted by Shannon at 10:59 AM No comments:

“You give joy to this city.” Sumariel Vasquez, Nuestre Gente Television
"Familia." Moreno
Monday dawned bright, slightly too bright. Not bright enough to wake up anyone early. I don't think Phillipe got up until 2:00, the maids must have cleaned around him. I was ready for some tea and toast. Maybe a coke--although don't ask for a "coca", ask for a "cola". One waitress gave me quite the look when I asked for the former. Nic and I think I was either asking for drugs or something dirty. Oops. Anyway, after some writing and breakfast Nic and I headed downtown for some shopping and an internet stop. First stop, the bank, next stop, Casa Nelson! A great place for shoes, clothes, household goods, decorative items and toiletries. We were looking for some kind of soothing creme or lotion for a few kids so I checked the shelves. They had scented, medicated, pink, glittered and my favorite, tortuga. That's right turtle creme. Nic and I decided against that one. We poked around and Nic found some colorful wraps for her girls and I found some great school t-shirts. We wandered down to our favorite tourist section and started our wheeling and dealing. I will spare you the details, it was more exciting to be there. We left with cigars, masks, t-shirts, jewelry and no money. Perfect. We talked Michael into 20 more minutes to get all those posts up on this blog. Back to the hotel. Time to meet Penny's family and hit the beach.
Did you know that Penny had a family in Puerto Plata? And a dog, of course. When Penny started coming to the DR and discovered Puerto Plata, she would stay at the Hotel Lomar. She got to know the manager, the maids, the neighbors, their dog. Soon, she was making deals with people, buying dog food, walking other people's animals. So, Cleo the dog next door is really Penny's dog. After we got back from shopping Penny asked if we wanted to go next door to meet Adriana and Kaila, her daughter. Carlos was at work, but we had met him earlier. Nic, Penny and I trudged next door with our towels as we were headed to the beach after our visit. Penny pushed at the huge rolling metal gate, and we slid through the opening. The family actually lived on a fairly huge lot that had several different kinds of fruit trees jumbled together with old refrigeration units and a few plastic chairs for company. Cleo was chained, but it was a fairly long one, and Penny was pleased to see how healthy she looked. Cleo was beside herself when she saw Penny, whining and wriggling like mad. We made our way past stainless steel walkins to a small structure with metal walls and roof. Adriana emerged with Kaila. Adriana is pregnant with their second child, a boy, due in the spring. She has a beautiful smile and a husky voice and is almost as tall as me. Kaila is 3 and was wearing her new pink dress that she showed off to Penny. Kaila's crazy corkscrew curls were admired by all of us. "Such beautiful hair!" we say. "Dangerous hair," says Adriana with a smile. Adriana and Penny talk while Nic and I wait for the translation, or for Kaila to come over and talk to us. Kaila is getting demanding and her mother's patience is starting to wear a little. The little one wants to play a game. Ok, a game it is. As we are trying to decide the game, Cleo can't stand it anymore and lunges for us, pulls herself free, then changes directions and bolts through the gate (that visitors who came after us have left open.) Kaila laughs wildly at this crazy new game where the big American ladies go booking down the street after the dog. How am I, of all people, running after a dog on the Malecon? Thankfully, she is distracted by some tasty tidbit on the street in front of the bar next door, and I step on her chain. The men in the bar stare at the two crazy American ladies and their dog. I turn around and realize that Kaila, too, has escaped. So Penny lets them both walk up the alley between the bar and the houselot, getting out the rest of that energy. This is too much excitement for me, I am ready for the beach. One of us lets Penny know it is almost 4 and we should head to the beach now while we can. We say thank you and good bye with our kisses and Kaila is wailing because the game is ending so soon. We beat feet across the street. Time for a dip
Posted by Shannon at 3:35 PM 1 comment:

Pictures from Monday to Thursday--pretty much

So below are about a dozen pictures from the first half of the trip. I have posted most of this album on my facebook account, so if you would like to see the whole thing and aren't my friend, just let me know and we will fix that! I continue to work on getting the video off my other computer and onto this blog. I am hoping to add the Kiddie Rave tomorrow! If you have any feedback or questions about the trip or the blog, you can email me at bohler@middlebury.edu. Enjoy!
Posted by Shannon at 1:54 PM No comments: 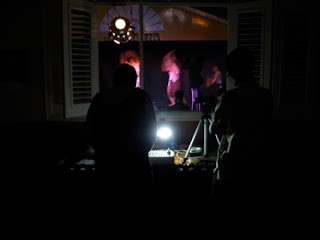 Jenn working her magic. I know it's hard to see anything, but the little toggle board is at the bottom of the pic, under the desk light, and you can see the back of the Par-can light (blue center stage special) right above Jenn's head.
Posted by Shannon at 1:52 PM No comments: 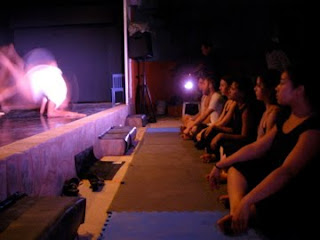 Tech Rehearsal, before the rain.
Posted by Shannon at 1:52 PM No comments: 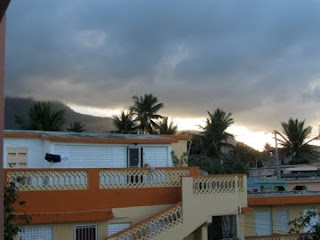 Here comes the rain! This is the view to left, coming out of our hotel door.
Posted by Shannon at 1:51 PM No comments: 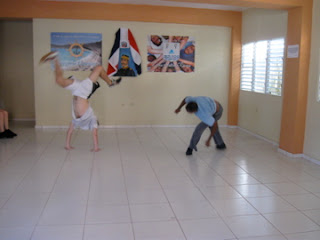 CAPOIERA!
Posted by Shannon at 1:50 PM No comments:

Shannon
Middlebury, Vermont
I am the Events and Administrative Coordinator for the Mahaney Center for the Arts at Middlebury College. When I was still teaching dance in 2003, I traveled with the Dance Company of Middlebury to Havana, Cuba for 9 days. The experience was astounding and changed me in many ways. Now, as someone working at the college, I will be going with the DCM on their tour of the Dominican Republic. We will be working with students and artists of all ages and sizes! What an amazing opportunity.